In this lesson series we will be examining the theory of evolution by natural selection, and how this results in the diverse range of lifeforms that exist across the world.

LESSON 1: Evolution by any other name

The Theory of Evolution is that all species are related through their shared ancestry and gradually change over time. The variation of genetic code allows the physical characteristics of an organism (its phenotype) to change. These changes, or mutations, can be either positive, negative, or neutral. Positive mutations allow an organism to better survive in its environment. This is often called an “increase in fitness,”  while negative mutations which make survival more difficult are said to “reduce fitness.” Neutral mutations are changes to the genetic code which do not effect the fitness of an organism. Often they do not effect the phenotype and are only detectable by genetic testing. The individuals with higher fitness tend to reproduce more successfully and are more likely to pass their positive mutations to their offspring. This is the basis for the Theory of Natural Selection. This viewpoint was popularized by Charles Darwin in 1859 in his book “On the Origin of Species.” The promotion of positive mutations and culling of negative ones over many generations leads to the gradual changes of species. Due to the variety of climates and the complexity of inter and intraspecies relationships across the planet, there are a staggering number of niches that can be (and are) filled.

By looking at shared traits between species and drawing connections between them, phylogentic trees can be formed. These trees can help us determine the relationships and relative ages of species to one another. The advent of genome mapping technology has given us much more precise ways of relating species to one another. Sometime species that have identical phenotypes (appearances) can have different genes. 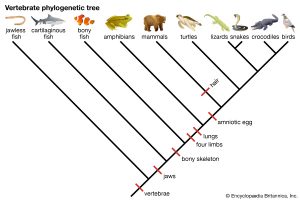 In the past there has been a backlash to the theory due to the argument that evolution would need a prohibitively long amount of time to occur to a significant degree. This has been disproven by changes seen in many species over the last century.

What types of evolution are there?

Convergent evolution is when similar adaptation evolve independently due to similar selective pressures. An example of this would be the adaptation of wings in insects, bats, and birds. All of these wings were derived separately by different body structures, but all confer the ability of flight.

When a body structure common between two species develops into different forms divergent evolution has occurred. These body structures are said to be homologous. The tarsal bones in many mammal species are homologous structures.

SEE ALSO: What Do a Bat, a Pig, a Mouse, and an Opossum Have in Common?

Co-evolution is a form of evolution where two species have had enough exposure to each other, that when one adapts, the other will as well. This is seen in the relationship between some flowering plants and their associated pollinators. If the flower has a radical change in it shape then the pollinator species must either change as well or lose its only food source.

Adaptive Radiation is an example of rapid evolution of a single species into more specialized organisms as they adapt to fill ecological niches, giving them access to new or different resources. The most famous example of this is the Galapagos finches beak shape.

Here is an interactive experience where you can try to identify finch based on their song and beak shape!