In order to understand evolution, it is necessary to view populations as a collection of individuals, each harboring a different set of traits. Different populations can host variation on traits, and given enough time and separation will speciate, diverging to the point where they qualify as a distinct species. Generally a single individual will not represent the genetics of an entire population unless there is no variation within that population as seen in species that undergo asexual or clonal growth. Individual organisms do not evolve, they retain the same genes throughout their life. When a population is evolving, the ratio of different genetic types changes. This leads to a gradual change in genetic composition over time, rather than the instantaneous conception of a new species. This is called the gradual equilibrium model.

In some cases it seemed that new species appeared to pop into existence. This can occur when fossil records are incomplete or significant change in a species has occurred over a short period of time. This is referred to as the punctuated equilibrium model.

What kind of adaptations?

There are many different bioregions, each with distinct climates and ecosystems that offer challenges to the species that inhabit them. These factors can be abiotic or biotic. Abiotic factors are the physical and chemical condition of an environment. The climate, topographic constraints, and chemical composition of the region can all impact species in the area. Biotic factors are all the biological factors that effect the populations in an ecosystem. These factors include the abundance of predators and prey, available resources like food and space. Changes in any of these factors will effect how successful a species will be in that area.

How can the environment effect species?

There are many different bioregions, each with distinct climates and ecosystems. Some locations have extreme conditions that require highly specialized adaptations for a species to be successful or even survive. 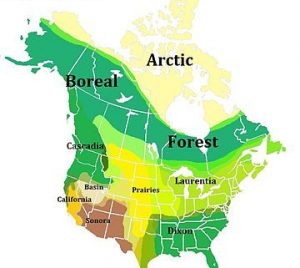 These bioregions contain species of all sizes, from tiny insects to large mammals. These animals may be uniquely suited to live in their native habitats (specialists) or may be able to survive in a wide range of living conditions (generalists).

How do biotic factors effect species?

Some species have specialized body parts that allow them to use resources that are difficult or impossible for others access, while others have advanced protective adaptations like antlers or ink jets which allow them to protect themselves from predators. Many animals have camouflage which allows them to blend with their environment and avoid detection. This boon can be beneficial for both predators and prey.