So for my first post about skills I thought it a no brainer to look at the throw most people start with, the backhand.

But before I get into that I have someone to introduce: 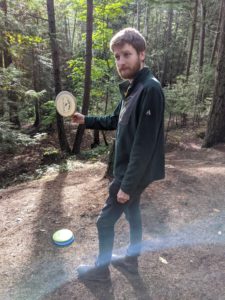 This is Mike. He is my friend from the Primary Education Program and my personal disk golf guru. We consistently play up at the Millstream Disk Golf Course. He will be making lots of appearances throughout my posts as I tend to take more pictures of him than myself.

My biggest issue with this particular throw is the power-to-accuracy ratio. I am able to get the disk to fly a fair distance, but at the expense of any sort of precision. This is unfortunate because the power doesn’t mean much if it goes 90 degrees off of where the intended direction was. Mike told me that the secret to a good backhand throw is getting a little snap of the wrist which gives the disk more spin than if you just throw with your arm. This is something I will need to practice in the coming weeks.